welcome to my blog

I am not a professional photographer, nor do I pretend to know what I am doing

you won't find any helpful photography hints or tips here, just some of my thoughts and experiences on my journey exploring photography

Part Two of my personal exploration on taking photos of strangers has been heavily edited due to the considerable concern it has caused an individual, I am sorry that rational, honest communication has proven untenable and hope any further harassment will cease.

Part Two was an exploration of the legality of taking people's photo without their permission, thinking about how they may feel about it and how I would feel about it.

It is not illegal to take photo's in public places in New Zealand, but should people be upset about it? I know I would feel uncomfortable because I don't know how they are intending on portraying me or where their image might end up. No one wants to be ridiculed or made to look like a freak or a curiosity, and having absolutely no say, or right to disallow it, is quite dis-empowering.

I shared an image on Google+ a couple of months ago of a young woman that I found amusing, but I removed it again because it did leave her open to ridicule and I began to feel guilty. I thought about how I would feel if it were me and decided I would rather just remove it. My daughter tells me a few of her friends have been ridiculed after appearing publicly on the facebook page of a local photographer. She also showed me some of his images, I can't comment on the quality of the photography - that is up to individuals to decide what they think of it - then I showed her what really good images of people look like - just off the top of my head these guys came to mind;

They certainly give me a lot to think about in terms of what my objectives are when photographing people and what I would be trying to convey. I would be flattered to have any one of them photograph me in the street (even to be made to look quite quirky by Joe Atwere), in the meantime both my daughter and I would rather avoid the local photographer if he is out and about.

Then, sometimes, you find a stranger who wants you to take his photo....

This guy calls himself the Vegabond Pirate and describes himself as a professional television/movie extra. He tells me he has appeared on the TV shows Zena: Warrior Princess, and Hercules: The Legendary Journeys - and of course, you can't be a professional extra in New Zealand without appearing in Lord of the Rings. He was quite the entertainer and was quick to show me some of his skills with juggling balls and nunchucks, and show me photos he was carrying in his pocket.....now, here's a guy who's always focused on marketing and promoting his character (I didn't have the heart to tell him I'm just an amateur photographer and wasn't likely to lead to any work). I took a few photos of him juggling and such, but this was by far my favourite image. Somewhere between his amusing antics he stopped for just a moment - and smiled, a real smile - and he suddenly became 3 dimensional.....

Taking Photos Of Strangers: Part I

I find it hard taking pictures of people, I feel like I am in their personal space and they are now in mine. It makes me uncomfortable. There is also the issue of whether or not to ask permission first. Once I have asked permission I feel the pressure to perform, I am no longer having fun and I am too self-conscious to focus on what's through the lens. If I ask permission afterwards there is the pressure of having something good to show for it, I have lost the discretion of going home and simply discarding anything that just didn't work. 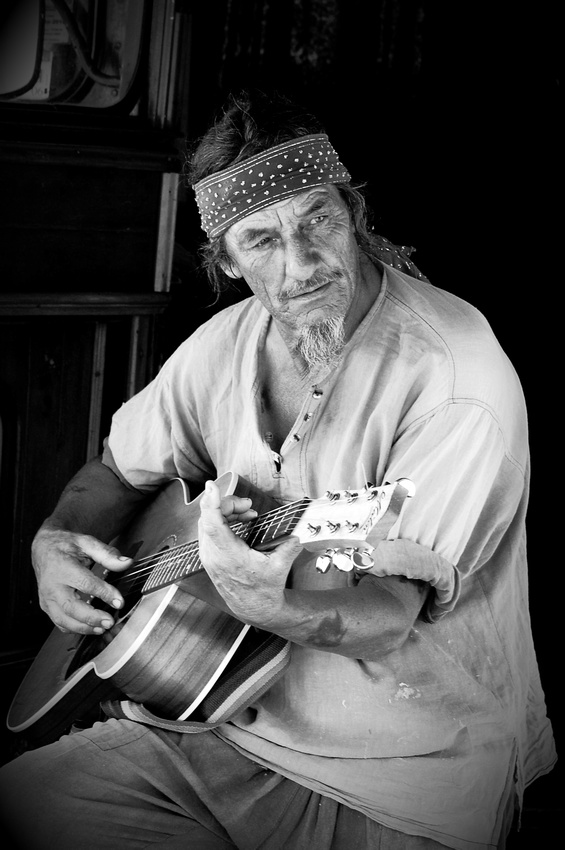 This is Ivan Berg,  I found him at the Gypsy Travellers Fair sheltering from the sun and playing a little guitar between customers. He and his family have been travelling around New Zealand with the Fair for more than a decade now - he photographs just beautifully and is one of my rare success stories.